Colombia rarely makes it to the top of culinary leader boards when it comes to ranking food from all over the world, but that doesn’t mean there isn’t a rich and varied gastronomic culture in the country.

Whether it’s a bandeja paisa from Antioquia or ajiaco in Bogotá, Colombian food is a treasure trove of delicacies and delicious titbits. Here’s a rundown of what to eat in Colombia, as well as some choice facts about Colombian food for good measure.

Breakfast is the most important meal of the day

There’s a saying in Colombia: “Desayunar como un rey, almorzar como un príncipe, y comer como un mendigo” (“Eat breakfast like a king, eat lunch like a prince and eat dinner like a beggar”). As such, don’t be surprised to see hearty platefuls of food at the day’s outset, such as…

Set yourself up with a bandeja paisa

The bandeja paisa (hailing from Antioquia, where Medellín is located) is one such option providing ample nourishment. Consisting of steak, sausages, pork rinds, ground beef, beans, a fried egg, plantains and an arepa (fried dough patty), the dish was generally what farmers feasted on before an exhausting day in the fields, but is now more commonly responsible for food comas.

Did you know that Colombia is the third biggest exporter of coffee in the world, behind only Brazil and Vietnam? The country produces over 810,000 metric tonnes of the good stuff every year, and not all of it is sent abroad. The most common variety you’ll see on the street is “tinto”, a bitter but high-strength shot of lower-quality beans that is sold from stalls for a few pennies.

A side of cheese with that?

Another common (but slightly unusual) way to drink coffee is alongside a slab of cheese. As well as hot chocolate, coffee is often accompanied by a wedge of fresh cheese (the specific variety depends on the region), which patrons are encouraged to dip into the piping hot drink. Don’t knock it until you’ve tried it.

Soup is a staple, no matter the temperature

Normally served as a starter before the main dish but also available on its own, soup is a staple of the culinary landscape in Colombia. One of the most popular varieties is ajiaco, a Bogotá favourite of chicken, corn, capers, avocado and sour cream in a thin broth that’s made using a herb called guasca, which sets it apart from regional variations in other countries.

Line your stomach with stomach lining

Another popular soup is mondongo, which is found all over the continent but all varieties of which are based on the same base ingredient: the stomach lining of a cow or pig! Alongside the tripe, Colombians also add onion, peas, carrots and coriander for a filling meal that’s actually very tasty once you get your head around its unpalatable ingredients.

Chow down on big-bottomed ants

Unsure of what to eat in Colombia alongside your ice-cold pola (beer)? Why not try some salted and roasted big-bottomed ants? These leafcutters with generous derrieres are a delicacy in the Santander department, but have since spread all over the country. A good source of protein and unsaturated fat, some locals even claim that “hormigas culonas” can help your libido.

So the idea of stuffing a suckling pig is not in itself too unusual or unique to Colombia, and here the ingredients of onions, rice, peas and spices aren’t that outrageous either. But the presentation of “lechona” is where this dish comes into its own, with the entire animal (head and all) served up at a barbecue, in a restaurant or at a store. Dig in!

Unripe mangoes are all the rage

One of the more publicised facts about Colombian food is the sheer number of tropical fruits on offer in the country, but did you know that they’re not always eaten once they’ve achieved full ripeness? Unripe mangoes in particular are hugely popular street foods, served doused with lime, salt and pepper. The first bite might seem overly sour, but they’ll grown on you. We promise.

While football is wildly popular in Colombia, the national sport is actually tejo. The game consists in throwing metal discs (tejos) at a clay pit target, into which pouches of gunpowder have been embedded. If the tejo makes contact with the gunpowder – kaboom! What’s more, beer is such a standardised component of the sport that many tejo halls don’t charge by the hour or game, but rather by the crate of beer. Game on! 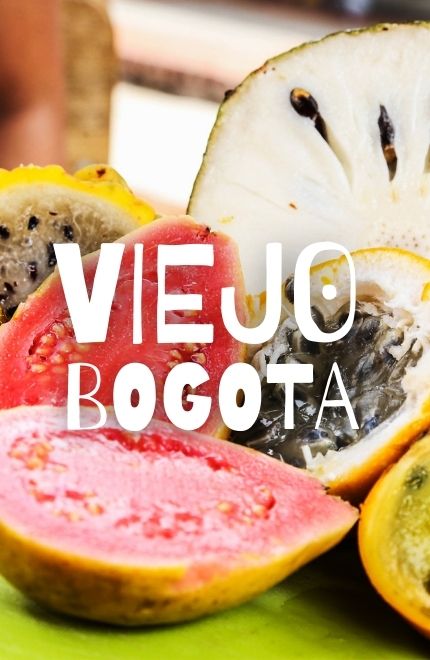