To the uninitiated navigating the complex street food of Mumbai can seem daunting. Fear not. We're here to help.

The street food of Mumbai is one of the most diverse in India. It may be down to its long history rising from tiny fishing village to one of the largest cities in Indian and countless waves of immigration from Persians to Gujaratis.

While the sights are worth seeing, to truly understand the city you'll need to try the street food of Mumbai. You could always join one of these daily Mumbai food tours or go it alone and dive head first into this culinary behemoth. To help you, here's our run down of the best street food in Mumbai and where to find it. 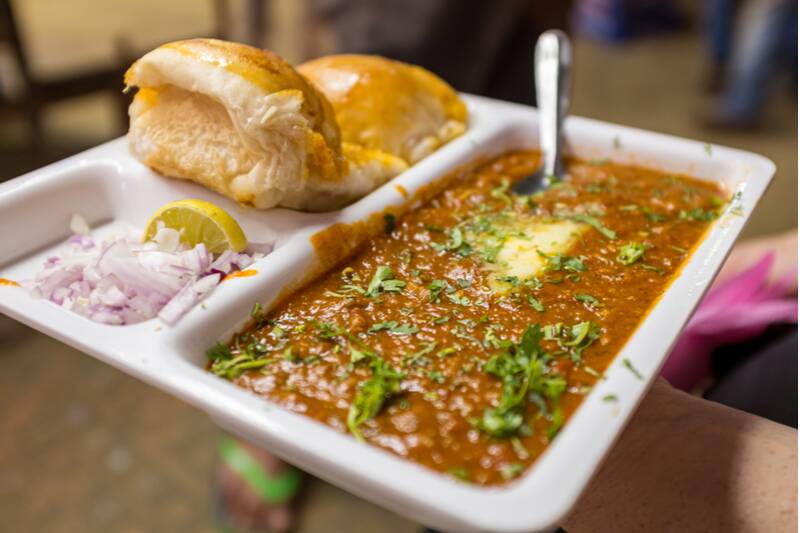 A tray of buttery pav bhaji in Mumbai

While pav bhaji is now found all other India, there is nothing quite like trying a plate of this rich vegetable dish at its origin. It's an iconic street food of Mumbai.

It’s simple enough to make, but not all are made equal. Take a bunch of vegetables and tomatoes, cook off and mash with just the right amount of seasoning and spices, then cover in grated paneer cheese and a large knob of butter.

It’s always accompanied by warm buttery rolls, crunchy sliced shallots, a slice of lime for a zingy punch and, if you’re lucky, a bright red chilli oil which provides just the right amount of kick.

You'll find plenty of places to plate, but some of the best is served out of the no-frills Cannon Pav Bhaji opposite Chhatrapati Shivaji Terminus in the Fort area. Expect queues, particularly around lunch and the early evening. 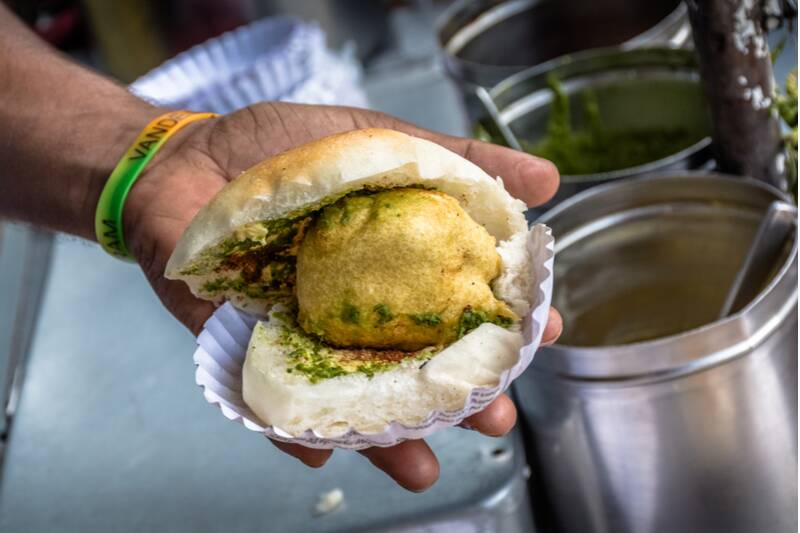 It’s wallet friendly too at just 10 cents each. You won’t have to look far, there are more than 30,000 vada pav sellers in the city alone. But some are much better than others. Ask any Mumbaikar and you'll invariable hear Ashok Vada Pav is the best in town. This simple curb side stand near Kirti College has a long list of celebrity patrons and has been making consistently good vada pavs for over 35 years. 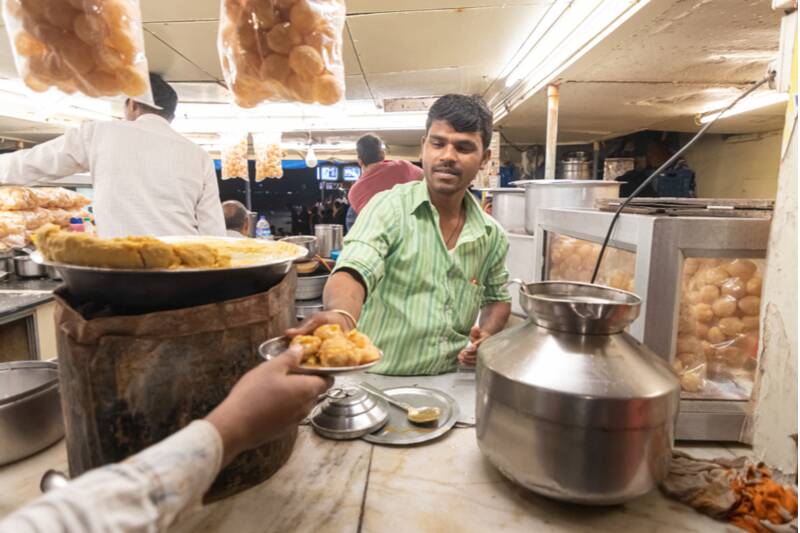 Depending on where you are in India, this chaat snack has a different name, but in Mumbai it’s known as pani puri. You can't talk about the street food in Mumbai without mentioning pani puri.

Look out for street vendors piled high with spherical puffed up pastry shells. When you’re ready to order, a hole is placed in the top from which they are quickly filled with spiced mash potato, chickpeas and tamarind water. Pop the whole thing in and let it burst in your mouth before holding out your hands ready for another.

The city isn't short on places to try the chaat snack, but if you head north to Bandra, be sure to swing by Elco Restaurant whose special blend of spices supposedly attract more than 1000 customers every day. 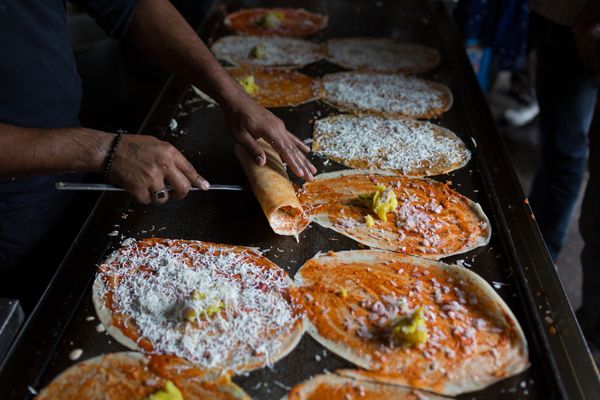 Mumbai sits at the crossroads between the North and South of India making it somewhat of a culinary melting pot.

Take the dosa for instance. This typically southern Indian breakfast snack isn’t a hard to find street food in Mumbai. These wafer thin crispy Indian pancakes are made from rice flour and are used to mop up southern Indian curries, sambas and chutneys. For something a little heavier, try the masala dosa filled with lightly spiced mashed potato.

There's lots of good spots around the city, but one of the best dosas in town is cooked up at Edward Dosa. This street food stand rolls their crispy dosas into torpedos and use a generous topping of grated paneer cheese. 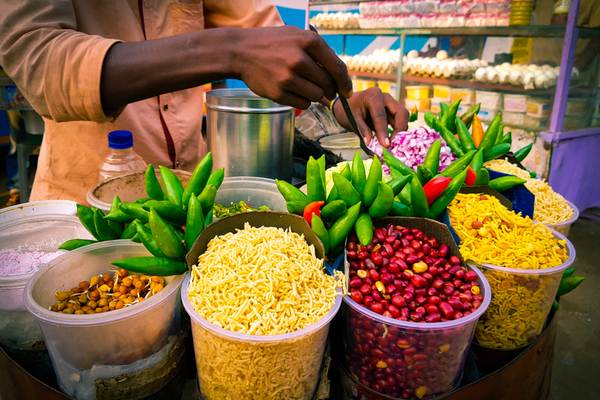 Mumbaiites know that if you want chaat snacks, you go to the beach. Look at for street vendors and the call of the bhel puri walla.

The street food of Mumbai recipe changes, but the plates of puffed rice are usually tossed in chopped shallots, tomatoes, spiced potato and tamarind chutney. While that might not sound that appealing, the balance of tart, spice and sweetness can be just the ticket.

There are several excellent vendors along Chowpatty Beach in the cluster of street stalls close to Charni Station. They'll even serve you along the wicker mats laid out on the sand. 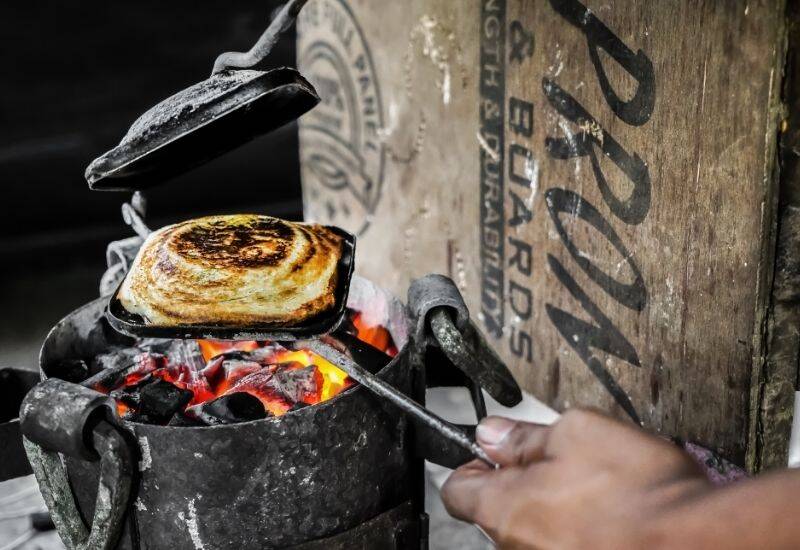 It may not have originated in India, but Mumbai has certainly taken this bready stable as their own. Other than meat fillings which are rarely found in the city, you can customise it in any way you like. Take your pick from tomatoes, vegetables, cheese, eggs, mayonnaise, then watch as your towering behemoth of a sandwich gets buttered and grilled.

This is the students’ street food of Mumbai and for good reason – you can pick up one of these beauties for just 25 cents. Go on, have another.

There are plenty of good Bombay sandwiches around the city, but the best we've found is an unnamed stalls along Veer Nariman Road. For decades, this tiny stall has been grilling Bombay sandwich the right way - over hot charcoal. 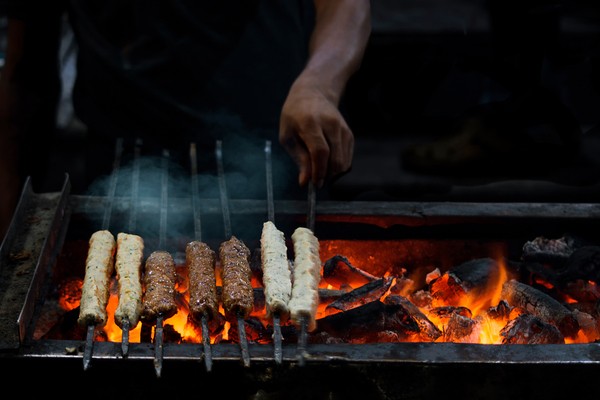 Everyone in the city knows that if you want a kebab you go to Mohammed Ali Road. The street is choked with beeping cars and crowds of pedestrians, but along its edge are dozens of shophouses and stalls grilling meats.

Smokey buffalo and lamb cooked over open coals makes for some of the best street food in Mumbai. While all are good, you'll find the tender mint-spiked seekh kebabs at Noor Mohammadi some of the best in town and can be eaten in comfortable surroundings. While you're there, try their signature chicken Sanju Baba. 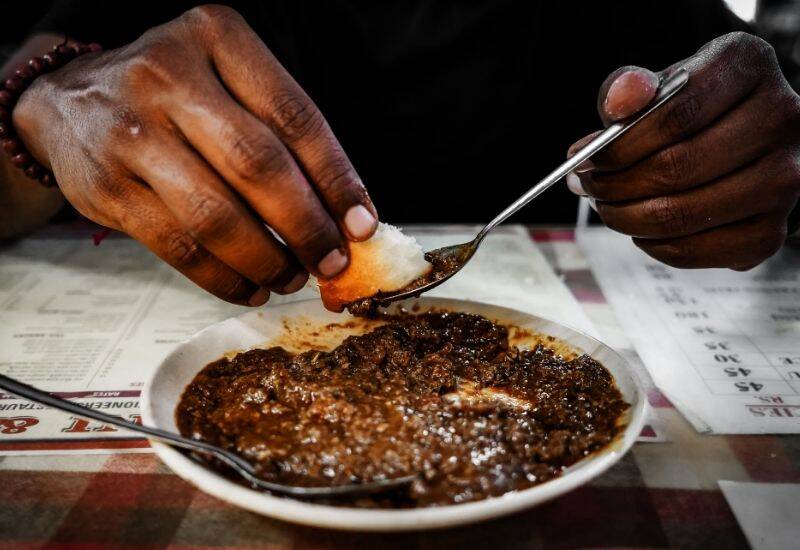 Influence of Persian settlers is still found in the street food of Mumbai today. One of the most notable dishes is kheema pav, a minced meat dish cooked in spices and served with chopped shallots, slices of lemon and piles of fluffy buttered rolls.

Unsurprisingly, the best kheema pav are found at the Irani cafes in Mumbai, but sadly these old-school eateries are fading fast. Try Kyani & Co. which has a slow-cooked mutton kheema that been a hit with locals for decades. If you find yourself in Kyani at breakfast, try the kheema cooked with scrambled eggs. 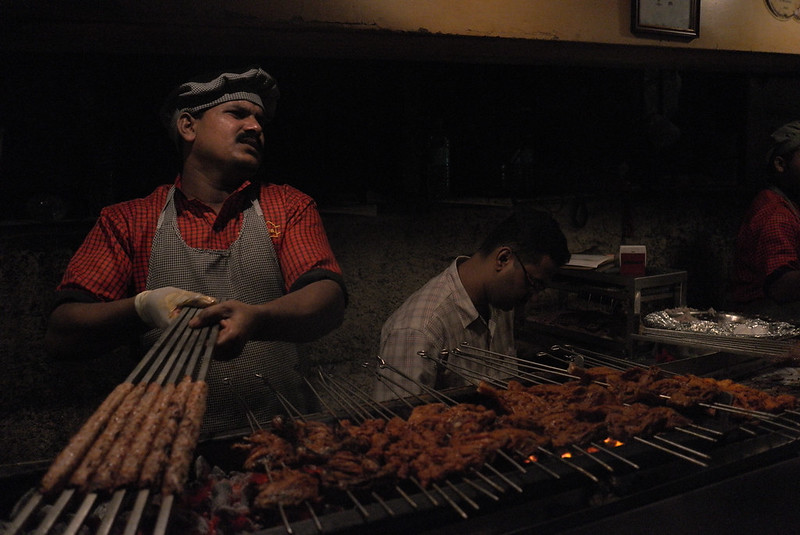 Chicken tikka rolls are synonymous with Bademiya, a small restaurant and street stalls just a block behind the Taj Mahal Palace Hotel. It's open-air kitchen grills the nearby streets every evening with a smoky aromas.

This famed street food in Mumbai is best eaten after midnight when rows of revellers line up for the perfectly formed rotis filled with masala-spiked chicken. A Mumbai crowd-pleaser.

So, there's our pick of the best street food in Mumbai and where to find it. If you're still confused, you can always hop on this daily Mumbai food tour. With the help of an expert local food guide, you'll learn about the city's food scene along with it's history. 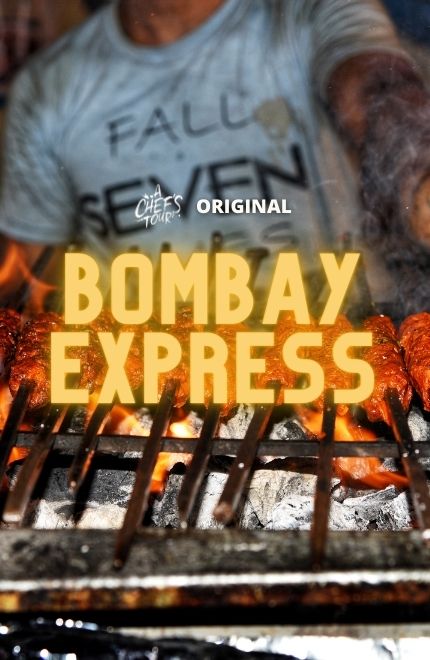 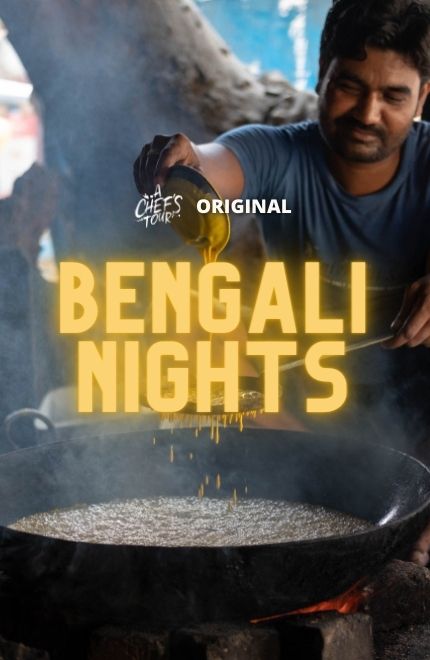 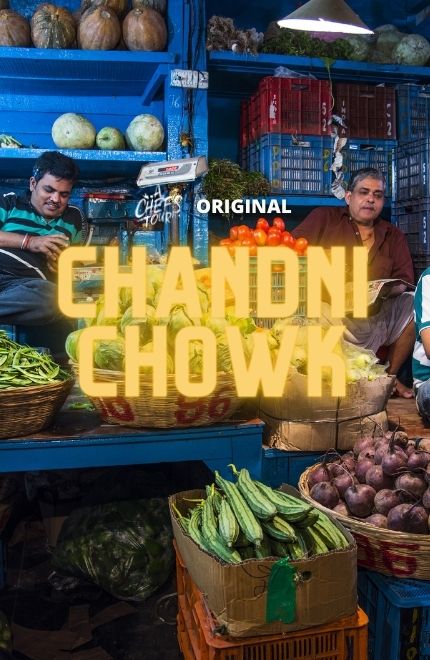 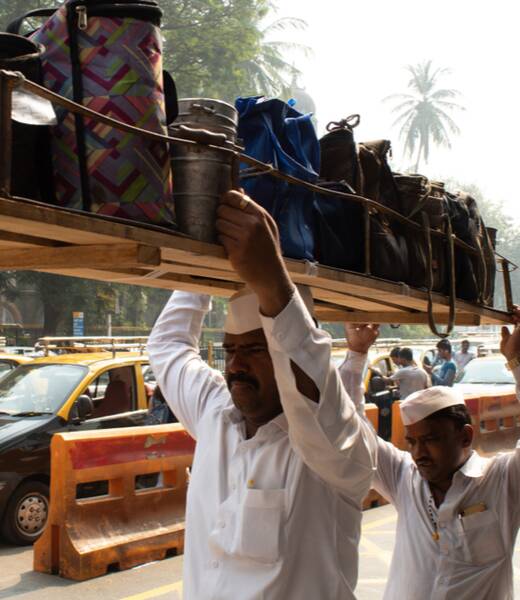 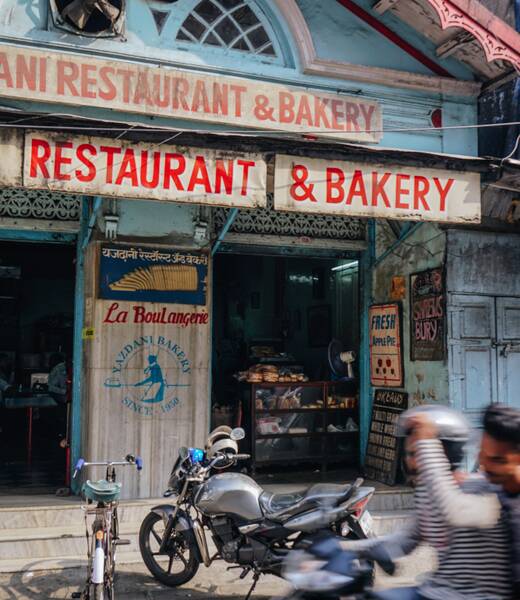 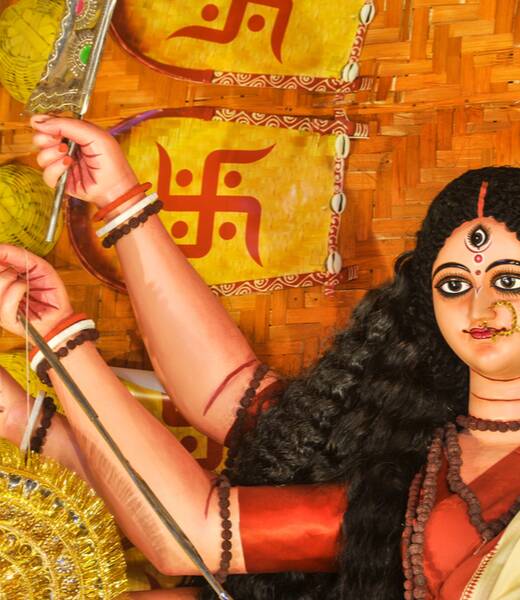